There’s no better feeling than waking up to a foot of powder or even freshly groomed corduroy following a natural snowfall. However, sometimes we have to rely on our snowmaking to pick up where Mother Nature left off. Over the past 46 years, Holiday Valley has invested over $13 million in to our massive snowmaking operations, with improvements and additions made nearly every season to make sure your favorite trails are blanketed top to bottom in the finest quality snow and as early as possible. Last season, the resort invested in more snowguns and more automation. We placed 10 auto-guns and hydrants on Upper Mardi Gras and 4 auto-guns and hydrants on Raven. We installed the HKD Tracker program that can record and track our 642 hydrants to manage snow quantity. Through a grant from NYSERDA, we purchased 107 HKD Impulse tower guns that we are installing for the 2019-20 season on Bearcub, Maple Leaf, Falcon, Champagne, Mistletoe, Independence, Boomerang, Shamrock and Northwind. These guns can make snow at higher temperatures and can operated with reduced compressed air (energy) at lower temperatures. They will be operated manually this season and then we'll add them to the automated system over the next few years.  Holiday Valley boasts the largest and most powerful HKD automated snowmaking systems on the East Coast, and is the most energy efficient system in the entire country.

Holiday Valley operates an air/water snowmaking system, meaning that compressed air and water travel through a total of 40 miles of underground pipes to hydrants on 95% of the slopes. Under ideal conditions in full operations, the systems can make 2.8 acre feet of snow per hour (picture this as a football field being covered with 2.8 feet of snow in one hour)!
Snowmaking can take place as soon as the temperatures drop below freezing, and under normal circumstances Holiday Valley would make snow when it is 24 degrees or below. But according to Steve Crowley, Director of Mountain Operations and former head of Snowmaking, the absolute ideal conditions are 18° wet bulb accompanied by frozen ground and approximately 10-15 mph winds from the West. Wet bulb is the air temperature adjusted for humidity, as the amount of water in the air affects the rate of evaporation; the dryer the air the quicker water evaporates and the more cooling takes place. Here’s a simplified version of how snow is made at Holiday Valley…

Water and compressed air move up through the snowgun pipe and at the top, the water sprays out through nozzles and breaks up into fine droplets. The compressed air coming out through the nozzle further breaks up the droplets and as the air expands it has a cooling effect to help freeze the fine droplets. The newer snowguns are “internally nucleated” which means that the air and water are mixed inside the head of the gun. This is ideal because it is a more controlled environment and as the mixture exits the nozzle it expands, causing the ice crystals to form faster by the super cooling effect of expansion. Once a nucleus forms, other molecules of water freeze around it to form a crystal. As they fall from the 30 foot towers, the crystals continue to freeze and accumulate in mounds on the ground. A new snow crystal is like an egg with a liquid center inside the frozen shell, so the mounds are left ungroomed for a period of time to “cure” the snow. The mounds are affectionately referred to as “whales” and some skier and riders actively seek them out to play on. The groomers eventually will plane the mounds when the curing process is complete and we’re left with a wonderful corduroy skiing surface.

Holiday Valley’s snowmaking system is comprised of 701 guns (including 337 automated guns) and 642 hydrants. The majority of the resorts snowguns are manufactured by HKD. The newest guns installed in 2011, 2012, 2013, 2014, 2015 and 2017, 2018 and 2019 are HKD Tower Impulse guns which are adjustable for air temperature and humidity. As the air temperature and humidity drop, the amount of compressed air can be decreased, which saves energy.

In 2005, Holiday Valley installed automated snowmaking on Cindy’s Run which allowed snowmakers to turn all of the guns on at the same time. The latest round of automated snowmaking is the HKD Klix system, which was installed on Mardi Gras in 2011, on Yodeler, Morning Star, and the Candy Cane loop in 2012, on Sunrise, Edelweiss and Foxfire in 2013, on The Wall, Snowledge, Crystal and Morning Star in 2014, Tannenbaum and Fiddler’s Elbow in 2015 and Cross Cut, Chute, Upper Northwind, Lower Crystal, Lower Cindy’s and Lower Foxfire in 2017 and Upper Mardi Gras and Raven in 2018. Automation has the advantage of quick startups and shut down, so even if favorable snowmaking temperatures exist for just an hour, the system can make snow. The Klix system also has weather stations that monitor temperature and humidity so the guns can automatically and individually adjust to changes.

The water used in snowmaking processes is sourced from the ponds on the golf course and the 64 million gallon Spruce Lake, located at the top of the Spruce Lake Quad lift. Spruce Lake was constructed during the summer of 2006, doubling the amount of water available for snowmaking.

The final and most important element of Holiday Valley snowmaking operations is the dedicated, hardworking and experienced snowmaking crew. Each of the 21 hearty men work through the dark of night in the fiercest weather to make sure the resort is in the best possible condition for the following day. Most of their work takes place from early December through the end of February to get the resort open as early and for as long as possible. So, if you see a snowmaker on or off hill this season (you can usually spot them by the bright yellow hardhats), be sure to thank them for all their efforts!

Once the snow is made and/or we get a nice natural snowfall, we need to spread it out and pack it down to create a nice smooth base to ski on. Holiday Valley has a fleet of 6 Pisten Bully grooming tractors that resurface the slopes almost every night. These powerful machines have a blade on the front to cut down humps and bumps and a tiller on the back to grind up hard snow and lay it back down as nice soft corduroy.

Four of the groomers are Pisten Bully 600's and we also have a Pisten Bully 100 used for fine details like shaped snow learning areas and terrain parks. The PB 100 also has a cross country track setter attachment. Our newest groomer is the Pisten Bully 600 Winch Cat which has a  a rotating arm with a winch cable that attaches to an anchor point at the top of the slope.  This allows the winch cat to groom uphill on steeper terrain resulting in a smoother, more consistent snow surface.

New for the 2019-20 season is the SnowSat system that tells groomers and snowmakers the depth of snow at any given place at the resort. This helps snowmakers to know where to make snow and helps the groomers know where to push the snow. 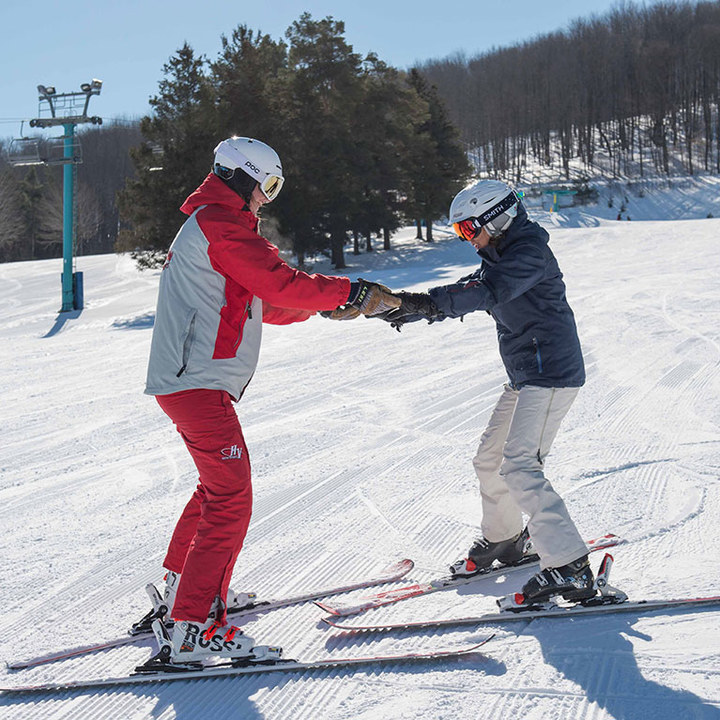 Learn to Ski or Ride for Half Price 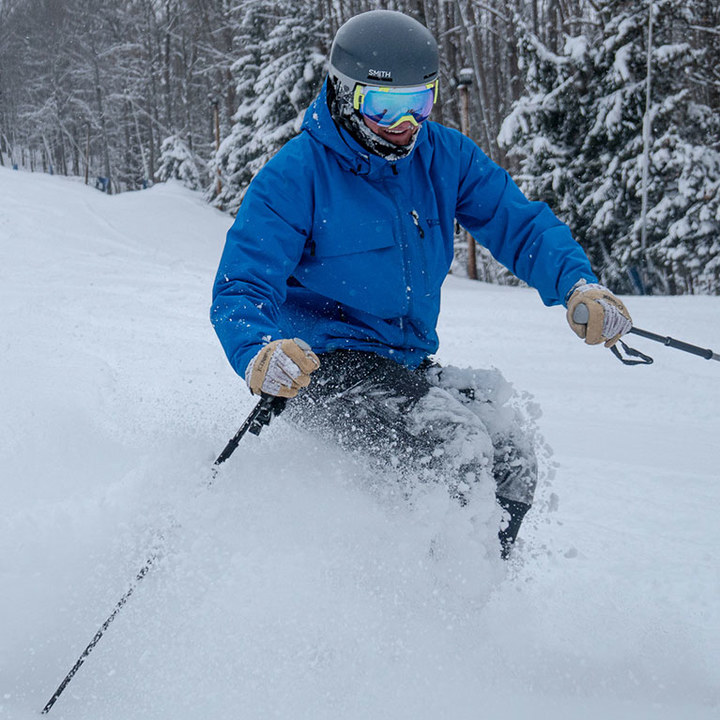 Pre-Purchase Lift Tickets, Save up to $10

Purchase lift tickets online at least a week in advance and save $10! 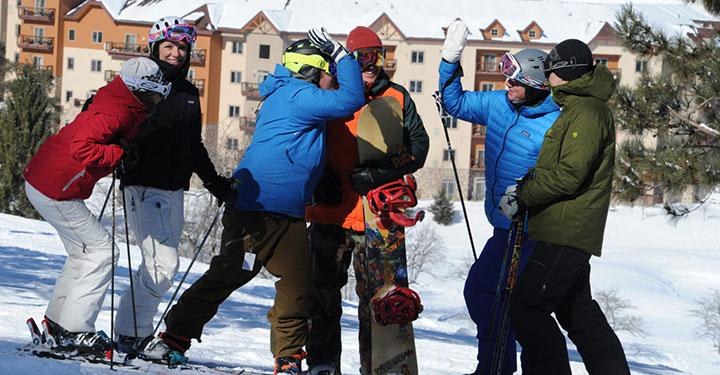 Check out these great deals on lift tickets, lodging and more.