It was many years ago in the winter of 1957-58 when the brand new ski area named Holiday Valley first opened for business. Skiing wasn't new to Ellicottville; Doc Northrup and Karl Fahrner started the first organized skiing in Ellicottville on Fish Hill in 1935. The Ellicottville Ski Club was formed in 1938 and adventurous men and women began to flock to Ellicottville from Buffalo, Rochester and Cleveland. The all important social aspect of skiing took place in the Lincoln Hotel, now the Ellicottville Inn. A rope tow was built on Greer Hill where the skiing and the ride up were more demanding. In 1956 Dick Congdon, John Fisher and Bill Northrup decided to pursue their dream of opening a larger, modern ski area. Shares of stock were sold for $100 from a card table in the parking lot in 1956 and in 1957, 4 slopes were cut and a T-bar was built. A mild early winter delayed opening until January 7, 1958 when the first skiers rode the T-bar up to ski down Yodeler, Champagne, Holiday Run and Edelweiss.

Now, Holiday Valley boasts 13 lifts, 60 slopes and trails, 3 base lodges, two hotels, a golf course, pools, aerial park, mountain coaster and numerous amenities. The resort has become a leader in the ski industry and ranks among the favorites of skiers in the East.

Check out a time line (pdf) of Holiday Valley's history, our projects and our leaders.

With heavy hearts we say farewell to Edna Northrup, one of our founders, who passed away on September 8th at age 95. She had a full and lively life and we were blessed to be a part of it. We chatted with Edna in March of 2020 where she told her story of how she fell in love with skiing and how she helped create Holiday Valley. 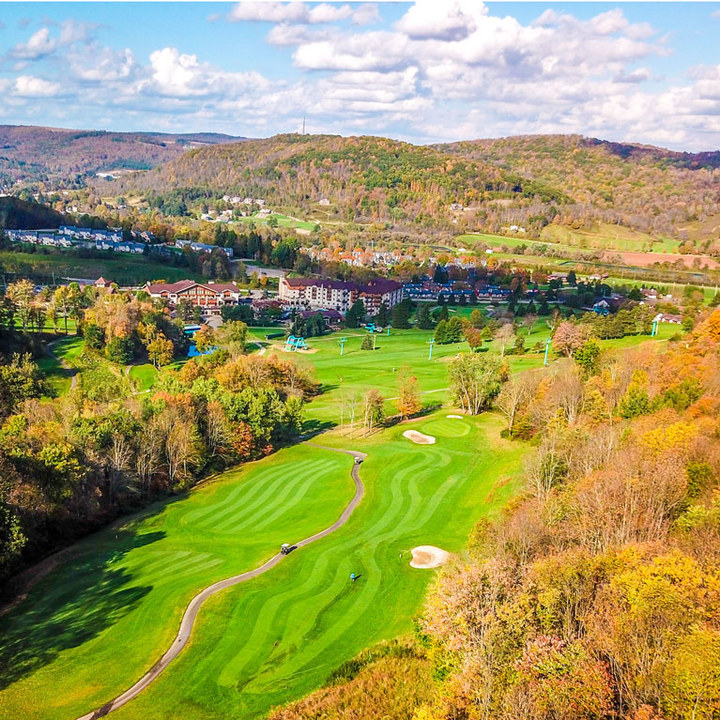 The Double Black Diamond Course is challenging and scenic - you'll defintely want to play more than one day! Enjoy . . .

Bring your club or fundraiser group of 20-144 players to Holiday Valley on Monday or Tuesday for $68 for tournament, . . .